In the Name of the Earth

CONGRATULATIONS AND THANK YOU TO ALL PARTICIPANTS.

Experience the world premiere of In the Name of the Earth, a large-scale choral piece performed by hundreds of singers on August 11

Saturday was the world premiere of John Luther Adams’s #IntheNameoftheEarth at the Cathedral of St. John the Divine, NYC. This free #MostlyMozart Festival premiere brought together hundreds of singers and thousands of audience members in celebration. Make sure to wear your headphones for the full sound experience in this 360° video.

Experience "In the Name of the Earth"

The following information is for the performers singing in the piece:
- Singers with mobility challenges should send an email to [email protected] to request access support
- Singers can find further information and FAQs by logging in to the website with the password provided in their email communications. 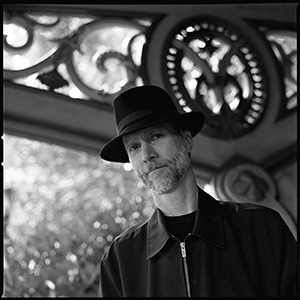 John Luther Adams is a composer whose life and work are deeply rooted in the natural world. Adams was awarded the 2014 Pulitzer Prize for Music for his symphonic work Become Ocean, as well as a Grammy Award for “Best Contemporary Classical Composition” (2014). Inuksuit, his outdoor work for up to 99 percussionists, is regularly performed all over the world. Columbia University has honored Adams with the William Schuman Award “to recognize the lifetime achievement of an American composer whose works have been widely performed and generally acknowledged to be of lasting significance.” A recipient of the Heinz Award for his contributions to raising environmental awareness, JLA has also been honored with the Nemmers Prize from Northwestern University “for melding the physical and musical worlds into a unique artistic vision that transcends stylistic boundaries.” Born in 1953, JLA grew up in the South and in the suburbs of New York City. He studied composition with James Tenney at the California Institute of the Arts, where he was in the first graduating class (in 1973). In the mid-1970s he became active in the campaign for the Alaska National Interest Lands Conservation Act, and subsequently served as executive director of the Northern Alaska Environmental Center. Adams has taught at Harvard University, the Oberlin Conservatory, Bennington College, and the University of Alaska. He has also served as composer in residence with the Anchorage Symphony, Anchorage Opera, Fairbanks Symphony, Arctic Chamber Orchestra, and the Alaska Public Radio Network. 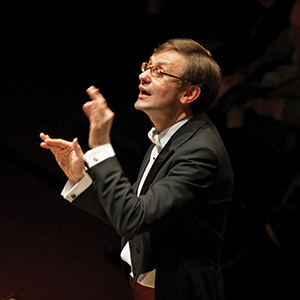 Simon Halsey occupies a unique position in classical music. He is the trusted advisor on choral singing to the world’s greatest conductors, orchestras and choruses, and also an ambassador for choral singing to amateurs of every age, ability and background. Making singing a central part of the world-class institutions with which he is associated, he has been instrumental in changing the level of symphonic singing across Europe.

He is also a highly respected teacher and academic, nurturing the next generation of choral conductors on in Birmingham and through masterclasses at Princeton, Yale and elsewhere. He holds three honorary doctorates from universities in the UK, and in 2011 Schott Music published his book and DVD on choral conducting, Chorleitung: Vom Konzept zum Konzert.

Halsey’s numerous awards include three Grammys for his recordings with the Rundfunkchor Berlin. He was made Commander of the British Empire in 2015, was awarded The Queen’s Medal for Music in 2014, and received the Officer’s Cross of the Order of Merit of the Federal Republic of Germany in 2011 in recognition of his outstanding contribution to choral music in Germany.

Born in London, Simon Halsey sang in the choirs of New College, Oxford, and of King’s College, Cambridge and studied conducting at the Royal College of Music in London. Recent highlights with CBSO chorus include a performance of Mahler’s Symphony No.2 with the Berliner Philharmoniker and the LSC at London’s Royal Festival Hall, celebrating Sir Simon Rattle’s 60th birthday. 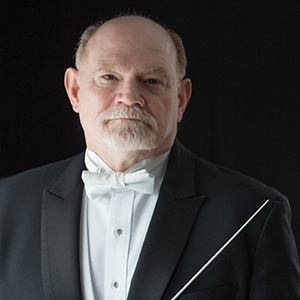 Patrick Gardner is Director of the Riverside Choral Society and Distinguished Professor of Music at the Mason Gross School of the Arts. His performances have been acclaimed by New York audiences, critics, and an international roster of composers whose orchestral and choral works he has conducted. Active in premiering new music, he has won the praise of notable composers such as William Bolcom, John Harbison, Lou Harrison, Jennifer Higdon, Tarik O’Regan, and Lukas Foss. The performance of major works by Lou Harrison he curated and conducted at Trinity Wall Street NYC was named in the New York Times list of “Best Classical Performances of 2017.” Now in his 28th season as director of the Riverside Choral Society (RCS), Gardner has prepared that ensemble for performances with the London Symphony, at the Mostly Mozart Festival, and with the Orchestra of the Age of Enlightenment. He has conducted over 100 major works for chorus and orchestra, including Bach’s B Minor Mass and Christmas Oratorio and the Mozart Requiem at Carnegie Hall and Beethoven’s Missa Solemnis at Lincoln Center with RCS and the Kirkpatrick Choir. In addition, Gardner has prepared RCS for a performance of Handel’s L’Allegro for the Mark Morris Dance Group. Gardner served on the 2011 grants panel of the National Endowment for the Arts.

Deborah Simpkin King, PhD, is a visionary conductor, new music advocate and educator who deeply believes in the power of music to affect the human spirit and enrich communities.

Dr. King is also Director of Music at Crescent Avenue Presbyterian Church in Plainfield, NJ; and Artistic Director of Crescent Concerts, a multi-disciplinary series. In this capacity she conducts Crescent Choral Society and Crescent Singers.

Professional contribution includes her chairmanship of the New York Choral Consortium and long-time coordination of the NJ-ACDA HS Choral Festival (since 1994). Dr. King was one of five conductors who worked with Simon Halsey in the 2016 premiere of David Lang’s commissioned work, the public domain, in celebration of the 50-year anniversary of Lincoln Center’s Mostly Mozart Festival. Her PhD is in Musicology, and she holds an MMus in Music Education/Choral conducting and a BMus in Vocal Performance. 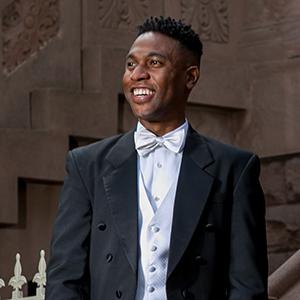 Conductor and baritone,, Malcolm J. Merriweather is Music Director of New York City’s The Dessoff Choirs, known for their performances of choral works from the pre-Baroque era through the 21st century. He is aAn Assistant Professor, he is Director of Choral Studies at Brooklyn College of the City University of New York, and the Artistic Director of “Voices of Haiti,” a 60-member children’s choir in Port-au-Prince, Haiti, operated by the Andrea Bocelli Foundation.

Soloist engagements for the 2017--2018 season include the premiere of Sanctuary Road by Pulitzer Prize- winner Paul Moravec with Kent Tritle and the Oratorio Society of New York at Carnegie Hall; and Fauré’s Requiem and Ralph Vaughan Williams’s Dona nobis pacem with Christopher Shepard and The Masterwork Chorus.

The baritone has also premiered contemporary solo works by Eve Beglarian, John Liberatore, Ju Ri Seo, Douglas Fisk, and James Adler, and. hHe has been a fellowship recipient at the Norfolk Chamber Music Festival and at the Tanglewood Music Center.

Ronnie Oliver, Jr. is currently the Associate Director of Choral Activities at the Manhattan School of Music, teaches conducting in the Evening Division of the Juilliard School, and is the Music Director of the Florilegium Chamber Choir in New York City. He has served as choral director and teacher of conducting at Westminster Choir College (Princeton, NJ), Western Michigan University, Western Kentucky University, Greensboro College (NC), and Texas Tech University.

Alex Canovas is a Brooklyn-based conductor, singer, teacher, and arts administrator. He currently serves as Associate Conductor for the critically-acclaimed vocal ensemble Choral Chameleon, Director of Music at St. Paul’s Episcopal Church in Carroll Gardens, Brooklyn, and Operations Manager for the Empire City Men’s Chorus. He was recently named the Artistic Director of the Young New Yorkers' Chorus, a position he'll begin in the summer of 2018. He previously served as Assistant Conductor of Ars Musica in Ridgewood, NJ, and the Opera Center Coordinator for the National Opera Center. Recent engagements include a residency at the San Francisco Conservatory of Music with Choral Chameleon, and performances at Brooklyn’s National Sawdust. Early studies in composition and voice led him to Ithaca College, where he earned a B.M. in Vocal Performance. He’s been fortunate enough to work with visionary artists such as Vince Peterson, Matt Oltman, Vance George, and Mark Shapiro.

Conductor and composer Anthony Blake Clark is the new Music Director of the nationally acclaimed and Emmy Award winning Baltimore Choral Arts Society, the premiere choral performance organization in the Baltimore region. Between engagements with the Baltimore Symphony, television broadcasts, subscription concerts, and education initiatives, BCAS reaches more than 100,000 people each year and is an integral part of Baltimore’s classical music scene. He has prepared choirs for many renowned conductors such as Sir John Eliot Gardiner, Simon Halsey CBE, Jack Everly, and Gijs Leenaars, for performances with some of the best ensembles in the world including the Berliner Philharmoniker and the Baltimore Symphony Orchestra. Clark is also the Director of Choral Activities at The George Washington University in DC where his choirs have recently performed at the Kennedy Center and are preparing for a concert tour of Japan in 2019. His compositions have been heard across the US and Europe.

Gregory J. Dlugos has a Bachelor of Music in Organ Performance and a Master of Arts Degree in Composition and Theory. He worked for many years as a church organist and has worked and as Music director, Conductor and Pianist for many Broadway Shows, and as Composer, Arranger and Orchestrator for several Tours and Fortune 500 Companies. He was also one of the conductors for The Mostly Mozart Festival’s presentation of David Lang’s the public domain in 2016.

Gregory is currently Music Supervisor of the Musical Theater Department at Montclair State University where he has Music Directed and/or Conducted numerous productions. Recent Productions include AIDA, A WHITE HOUSE CANTATA by Leonard Bernstein and Alan Jay Lerner and ANYTHING GOES.

In addition to his supervisory duties, Gregory conducts “MSU Encore” for the Music Theatre Department in the Department of Theater & Dance and teaches in the John J. Cali School of Music.

Rebecca Hof is thrilled to return to Mostly Mozart after being a part of the production team in the 2016 premiere of “the public domain.” She hails from Chicago with a background in vocal music education. Rebecca attended Millikin University and taught general music and conducted high school performance groups for several years in Illinois. Up for a new adventure, she traveled to New York City, attended New York University, and graduated with her Masters in Performing Arts Administration. She is currently an associate in the Marketing & Communications department at the Metropolitan Opera.

In the Name of the Earth Cast

Co-presented with Lincoln Center’s Out of Doors

Commissioned by Lincoln Center for the Performing Arts

The 2018 Mostly Mozart Festival presentation of In the Name of the Earth is made possible in part by The Andrew W. Mellon Foundation, The Ford Foundation, Rita E. and Gustave M. Hauser, and Stavros Niarchos Foundation.